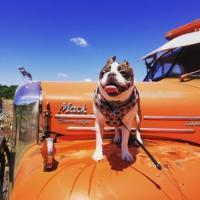 Here's a litte video of the truck for all those interested. Making some headway here and there, working on painting the bed currently. Pics to come.

Hi y'all, I just picked up an old B61 dump truck. I've been searching for a dump for awhile now and have been waiting for the right one to come up. My Dad and Grandpa ran a R model 300/ 10 speed

That’s neat he was still showing it in 2001 that’s the first year I started showing my 1976 Autocar. I’ll try to find those pics or I know a guy who might. Here’s my old Autocar I’m sure your dad will