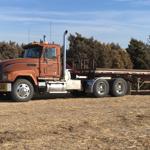 The B81 was owned by Murray Paving. They use to park in the same yard as us in Mahwah, NJ. When the producer was looking for trucks for the movie he went to Hudson County Motors in Secaucus and they h

From The Black Lillies Smokestack lady and Rob Snyders ammo....sorry I had to I just had to, im proud of it!

Possessed by a meteor alnog with the Clown rig.