What's the turbo that rochester uses? 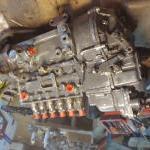