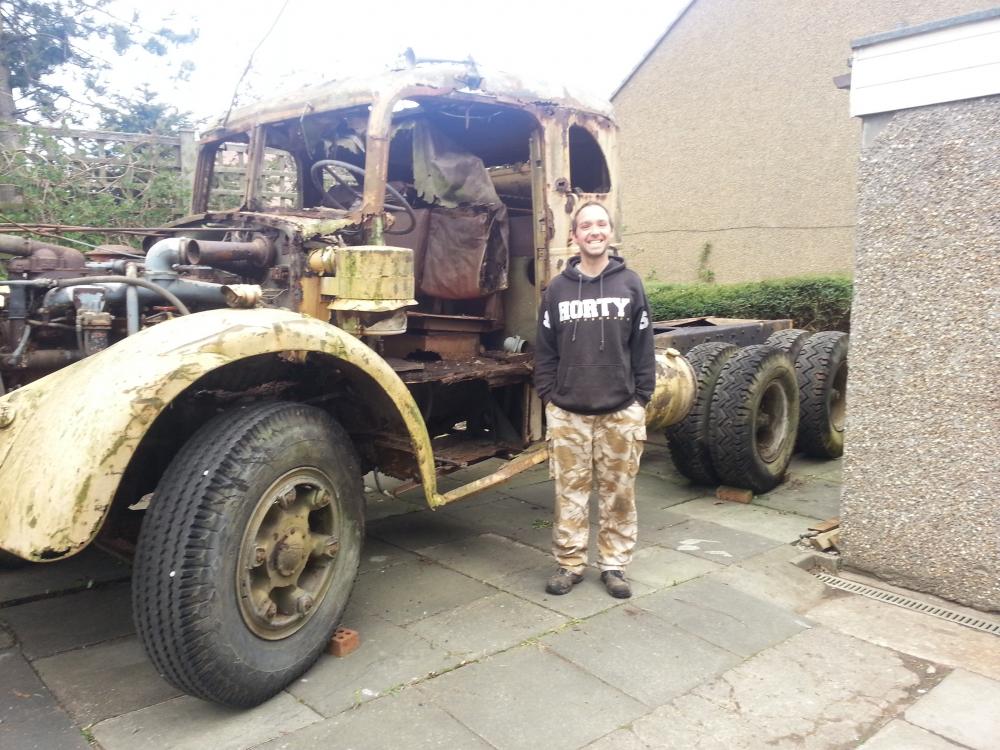 It's been an eventful couple of days. Day five started with a phone call to say the crane was coming off the back of the truck, with the help of a Manitou. It started with burning off the bolts that held the crane onto the chassis and giving the crane a wee tug but the tow hitch was fouling it. A 70mm socket and a sledgehammer for a bit of gentle persuasion soon took care of that!

The crane was removed and placed out of the way of estate traffic. The next job was to figure out how we were going to get it home. We managed to get help from a friend with a tractor, and burnt a hole through the front cross member of the winch to take a bolt for the towbar.

Day six started at early o'clock, down to the estate to hook up with the tractor and start our epic journey home! It was a rather bumpy ride with no seat, floor or driver's door. Making it out over the first cattle grid was trouble free even though the tyres were all flat-spotted, this caused the roof to separate from the A pillars and showering me with rust from ad-hoc sunroof! Half a mile further on the vibrations were shaking my fillings loose and also ejecting the passenger door almost hitting the escort vehicle. From there it was plain sailing until a tight right turn into a small village took us wide and scared the life out of a old woman standing at a bus stop, who couldn't quite work out why I was on the wrong side of the vehicle and saying good morning through the door that wasn't there. Turning heads all the way home and narrowly missing a passing bus we managed to get it to the house where we backed it into the drive and straight through the neighbour's hedge! The typical Scottish weather meant the first job was to throw a tarpaulin over all the holes in the cab and cover over the missing bonnet. We didn't do much else other than try to figure out what all the levers did and evicting a mummified rat from the bunk! No rent paid, no digs!

Between the beautiful Scottish rain showers we swept up some of the broken glass and rust to protect our dog Morgan. I went underneath to see if I could tell if the engine was seized or not but after removing the inspection covers on the bell housing, getting a face full of water and rust, I found no way of turning the flywheel. Moving to the propshaft, which was spinning freely, my girlfriend was inside wiggling the levers to try and engage the gearbox to the flywheel. As the rain came down yet again, we managed to figure out that one lever engaged the box and using a crowbar in the universal joint we managed to turn the motor quarter of an inch, moving the crankshaft pulley and dislodging yet more rust!

Tune in for the next gripping installment of man vs truck where at this point the truck is well in the lead!

We have placed cookies on your device to help customize your user experience here on BMT. You can adjust your cookie settings to your preferences if you like, otherwise we'll assume that you're okay to continue.