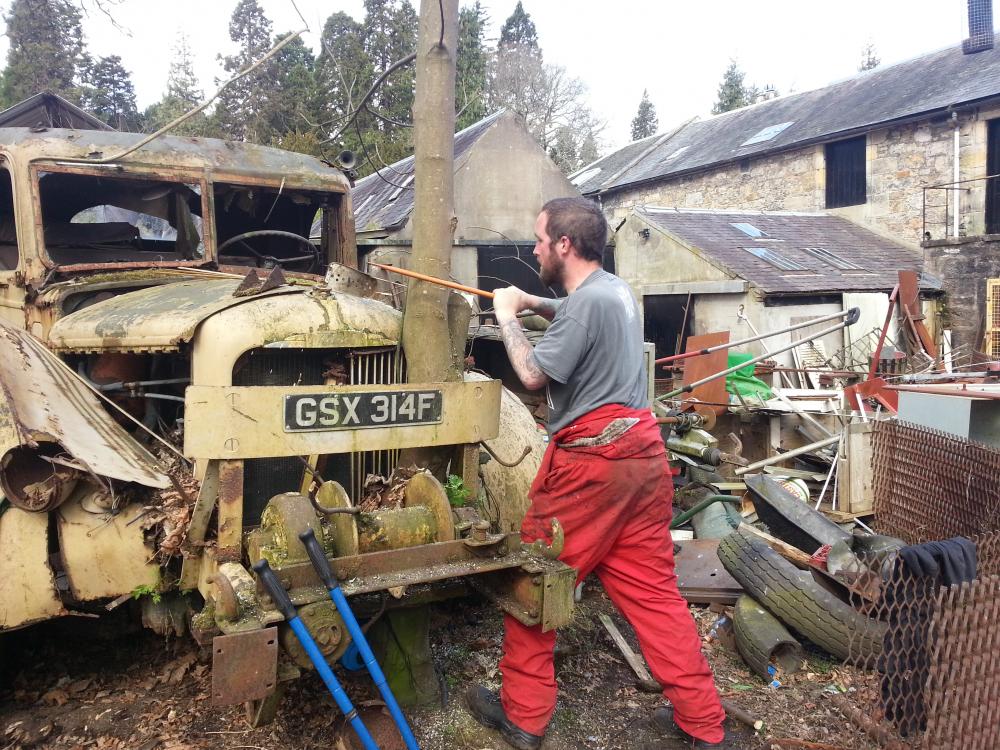 Day three of the recovery:

It was a fairly early start for day three. The mission for this visit was to remove tree and clear underneath.

The tree put up a brave fight and was much taller than we thought but armed with only a bushman saw and a length of rope (needed to make sure the tree didn't fall through a building) we set about it. I decided to take the top off first so started just above the radiator cap and took out the thinner of the two trunks first. With this coming down with no deaths or damage to property the second and much thicker trunk was exposed. All went well with this apart from blocking an access road with the fallen tree so we cut it into smaller lengths and cleared the road. Once the top was removed (all those hours watching the discovery channel paid off) I went to the trunk that was below and growing through the bumper. Cutting through was a bit tough but the use of a ten ton jack helped with the last bit.

Next on the to-do list was trying to get the rear axles in the air and clear under the wheels. The first wheel in the air was the passenger rear most wheel. I decided to give the brake actuators a bit of a bang with my little hammer on the off chance that it may budge. To my surprise it looked like it moved a little. Then came the larger hammer and a bit of brute force. After a lot of sweating and a few choice words I thought I would stand on top of the wheels so I could get a bloody good swing and to our surprise the wheels budged. I felt like I was on the log roll and we got it going a little bit, then a lot and finally doing a full 360 with movement in the prop shaft.

With this we were spurred on to try and see if it was a fluke or if the other rear wheels could be freed. Considering this truck was last moved in the early 80's I was not holding my breath. But the luck of the gods was with us and we managed to get two more sets of wheels moving with the exception of the drivers rear most wheels not budging. I think this may have been caused by a newer looking brake actuator and a lack of access to swing my hammer. But we decided to call it a day and head home.

Knowing that the back end is pretty much rolling and we could recover it with a spec lift truck or a home made A frame we are quite happy. Looking forward to day four...... will keep you posted.

P.S thanks to Vlad and Lucas for all their information.